This information is being presented for educational purposes and should not be considered medical advice. Please consult with your doctor about your unique needs

Knowing whether or not you are at risk of HIV transmission is rarely a clear cut scenario. Additionally, there is a lot of misinformation and falsehoods regarding the topic of HIV and HIV transmission.

You probably have a lot of questions – some that you might be too afraid to ask. Learning about how to safeguard yourself is not something you want to be doing in hindsight.

In this guide, we want to break down some of the myths you may have heard about HIV transmission, as well as explain how HIV is caused and how HIV transmission can be prevented.

The human immunodeficiency virus (known as HIV) is a virus that compromises the body’s immune system. A person diagnosed with HIV will experience a hindered ability to fight off diseases and infections.

HIV contraction attacks and destroys CD4 cells (also known as T cells), which are the cells used by the immune system when there is an infection present. Over time, this virus can wear down the immune system. Now, it is important to understand that HIV is a manageable health condition when people are using proper treatment. While there is no cure for HIV, medication can slow down the progression of the virus, and many people living with HIV can go on to live normal, healthy lives.

A Brief History of HIV
history

The first recorded incident of HIV in humans occurred in the 1970s. At this time, little was known about the virus and how to prevent transmission, so it quickly transmitted throughout America, Europe, Africa, Asia, and Australia into the 1980s.

Since there was no treatment available, many people living with HIV were unable to slow down the virus and were diagnosed with Stage 3 HIV, also known as AIDS.

First treatment for
HIV was developed

In 1987, the first treatment for HIV was developed. This treatment was given to people living with HIV to slow down the progression of the virus. Throughout the 1990s, more progress was made in the treatment of HIV and many organizations worked together to create more awareness to combat the stigma often associated with the virus.

more progress was made in the treatment

In 2012, the FDA approved a medication to prevent the sexual transmission of HIV

By 2017, more than half of all people living with HIV were receiving proper antiretroviral treatment.

Number of people living with HIV on Treatment

Detecting the early signs of HIV is one of the best ways to prevent progression. If a person begins to experience HIV symptoms and the virus is detected, they must begin treatment right away.

Here are some of the early symptoms of HIV:

According to HIV.gov, about 66% of people will experience flu-like symptoms within two to four weeks after an HIV transmission. However, not every person will experience all of these symptoms – and some will have no HIV symptoms whatsoever.

The only accurate way to determine whether or not you have HIV is to be tested at a doctor’s office. These tests will detect antibodies that your body makes as a reaction to HIV during the early stages of transmission.

How HIV is Caused and Transmitted

HIV can only be contracted through the transmission of bodily fluids. You cannot “catch” HIV through casual physical contact like a hug or a handshake, and it does not pass like a cold or the flu through the air or on surfaces.

Some of the most common ways that HIV is transmitted through bodily fluids are:

Let’s discuss them in detail.

It is possible for a person to contract HIV if they receive HIV-positive blood through a transfusion. However, this occurrence is extremely rare, as all blood donors are now required to be tested for HIV. As you can see, the CDC has done a lot of work to prevent this from occurring, and there has only been one instance of HIV transmission via blood transfusion since 2002. 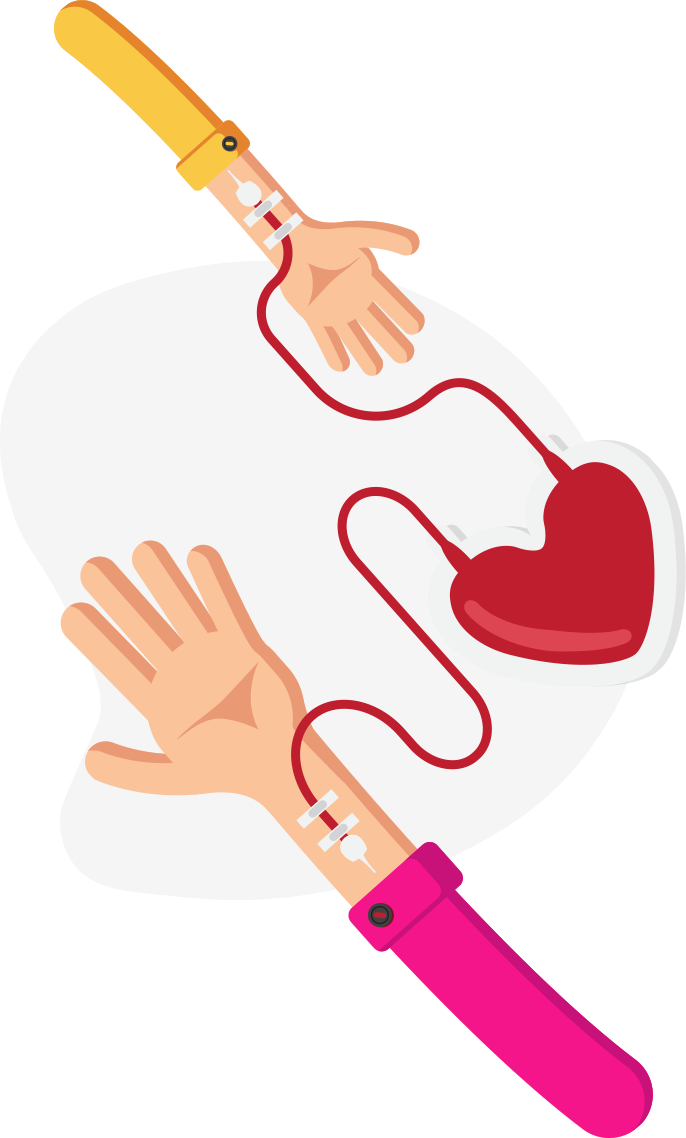 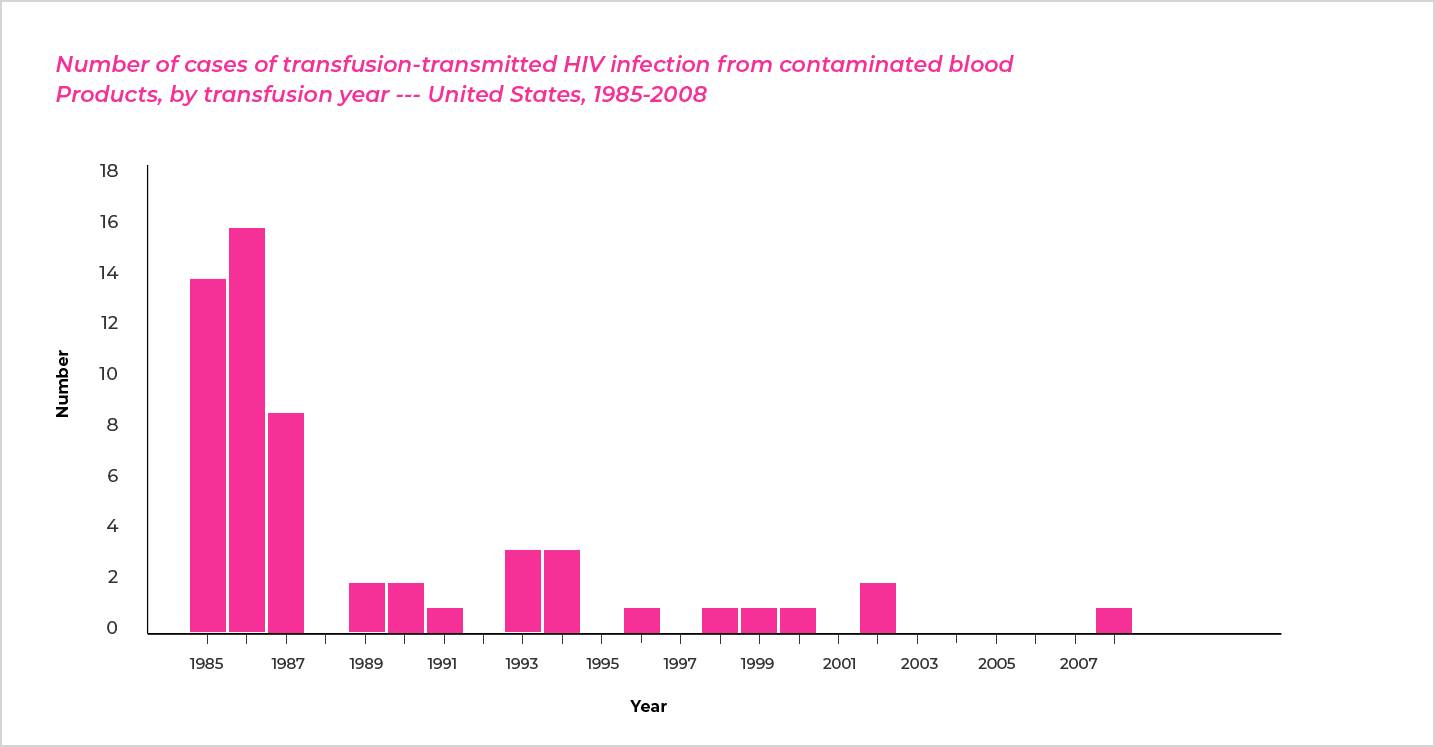 One of the most common ways that HIV is transmitted is through sexual intercourse. HIV can be transmitted through condom-less sex, sex without PrEP medication, or improper use of condom protection through:

HIV is not commonly transmitted through oral sex, but there is still some risk if any fluid enters the body, such as through a cut. It is recommended that a condom is used at all times to prevent the transmission of any STI, including HIV.

If a person living with HIV becomes pregnant, there is a chance that their child will be born with the virus.

However, not every expecting parent will pass HIV along to their child, and this can be prevented if the expecting parent receives medication during pregnancy and childbirth. Once the baby is delivered, they should also receive HIV medication for 4 to 6 weeks to reduce any infections and prevent transmission. 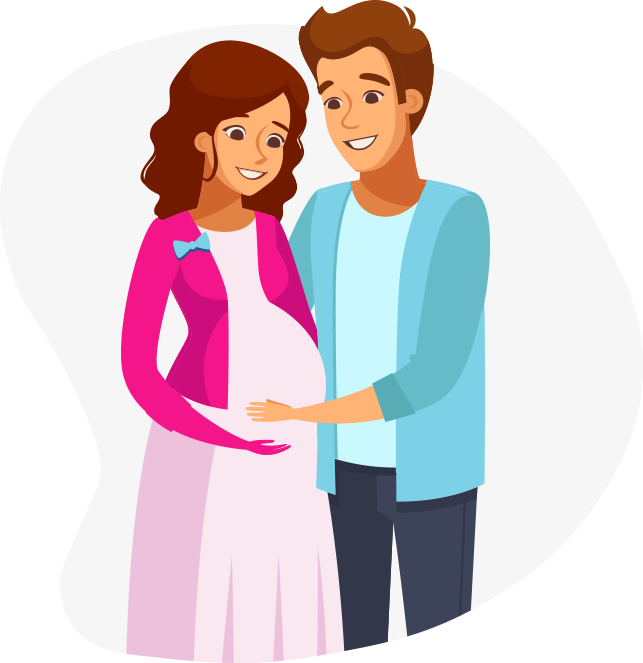 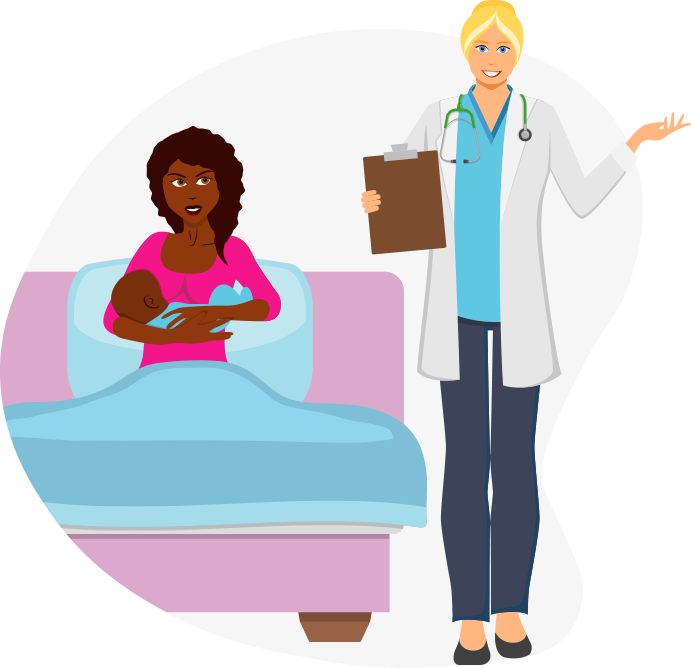 7% of infants who were breastfed by a parent with HIV were affected.

So, a parent with HIV will need to continue to take HIV medication if they choose to breastfeed. It should be noted that the United States Public Health Service recommends that people with HIV do not breastfeed their babies, and instead choose an alternative — such as formula. 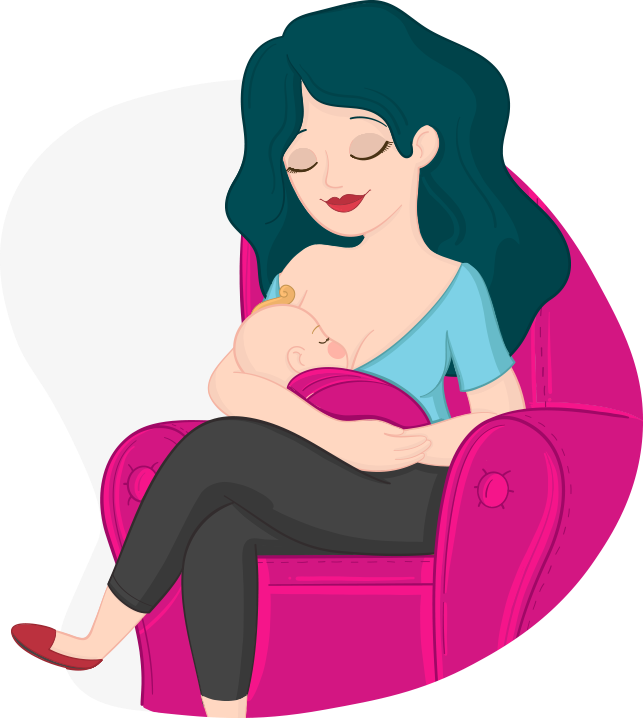 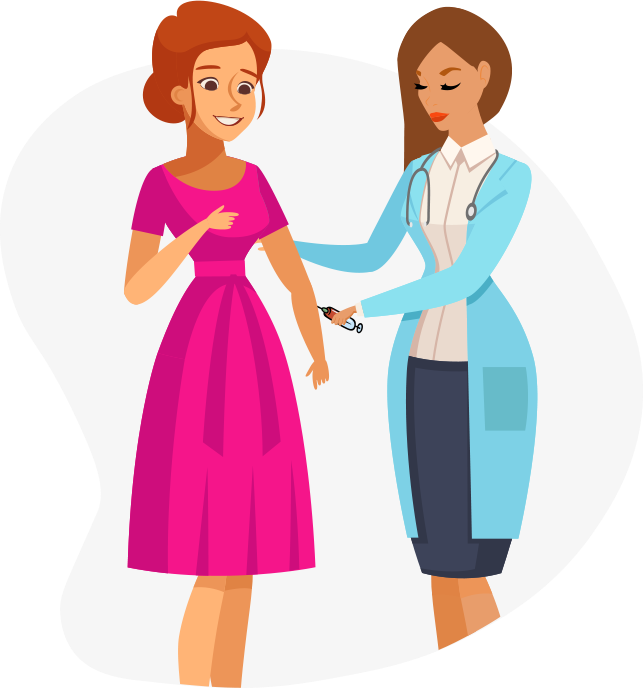 Sharing intravenous needles or syringes that pierce the skin is another way HIV can be transmitted from person-to-person. This most commonly occurs when needles are shared for drug injections.

However, it can also be transmitted through used tattoo or piercing needles, or if you accidentally poke yourself with a used needle.

You should always use a sterile needle for any injections and never share – even if neither person thinks they have HIV. This is the best way to prevent HIV transmission from occurring. 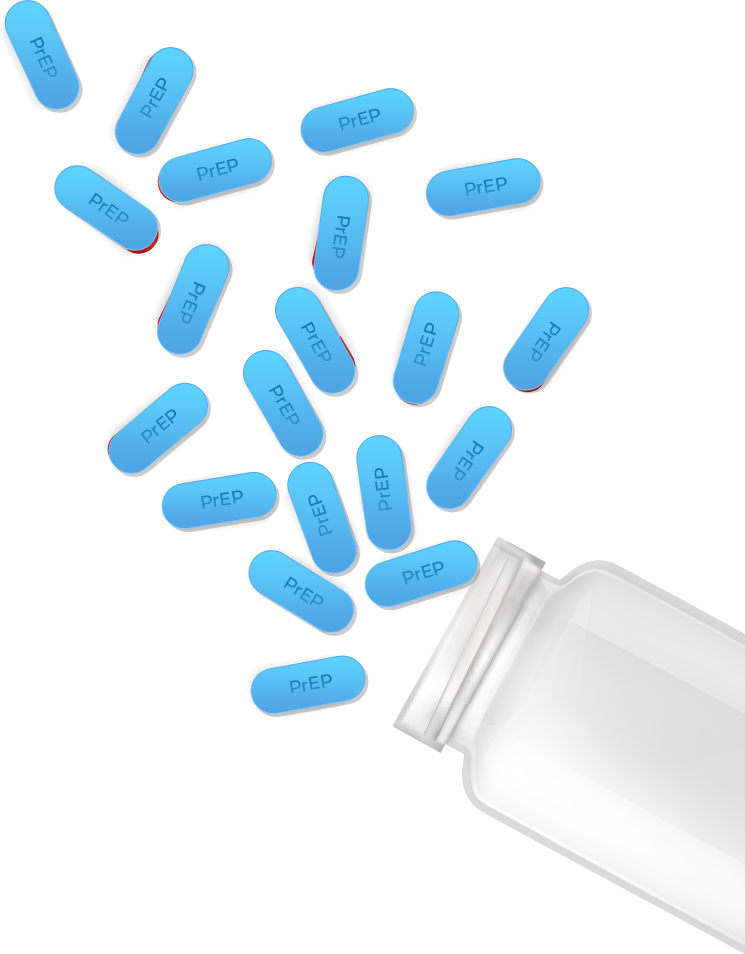 How HIV Transmission Can Be Prevented

HIV transmission can easily be prevented if proper precautions are taken. Let’s discuss the precautions one should take:

There are several medications available to prevent the transmission of HIV from one person to the other, primarily via sexual intercourse.

PrEP is a prescription medication that, when taken daily, is proven to be 90% effective at protecting a person from HIV transmission.

This medication is recommended for people who are currently HIV-negative, but at are risk of transmission. This would be a person who is sexually active (especially with multiple partners) or works in an environment where they could come into contact with bodily fluids (such as a healthcare provider).

PrEP does not cure HIV. However, it does prevent HIV from infecting the body by blocking the virus from infiltrating the enzymes of the body’s cells.

PEP is an antiretroviral medication that is prescribed after a person has potentially been exposed to HIV, such as through sexual intercourse or a shared needle.

PEP must be taken within 72 hours of exposure in order to be effective.

The medication must also be taken 1 to 2 times a day for at least 28 consecutive days to prevent HIV transmission. Once this regimen is completed, the person will be tested for HIV to see if the medication prevention is successful.

Antiretroviral therapy is a medical treatment that stops or suppresses a retrovirus – including HIV.

In 2016, the Prevention Access Campaign launched an initiative to help end the HIV/AIDS pandemic – in addition to the stigma tied to HIV. This initiative is called U=U – short for Undetectable = Untransmittable.

U=U signifies that Individuals with HIV are receiving antiretroviral therapy and maintain an undetectable viral load – meaning HIV cannot be transmitted sexually to others. This concept has powerful evidence tied to the implications of HIV treatment – both from a scientific and public health standpoint.

There are other ways that you can prevent the transmission of HIV.

However, it is important to note that these precautions should be done in conjunction with advice from your doctor regarding PrEP medication to provide the greatest protection. 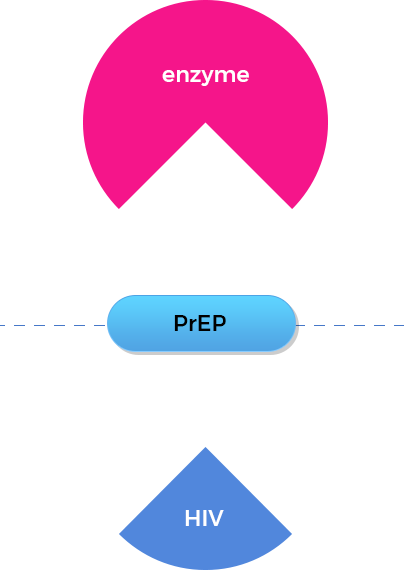 There are several factors that can increase chances of HIV transmission. This includes:

7% of people affected by HIV are heterosexual intravenous drug users, with 4% being male and 3% being female.

Although these groups combined make up less than a third of the country’s population, they account for 69% of all HIV diagnoses. 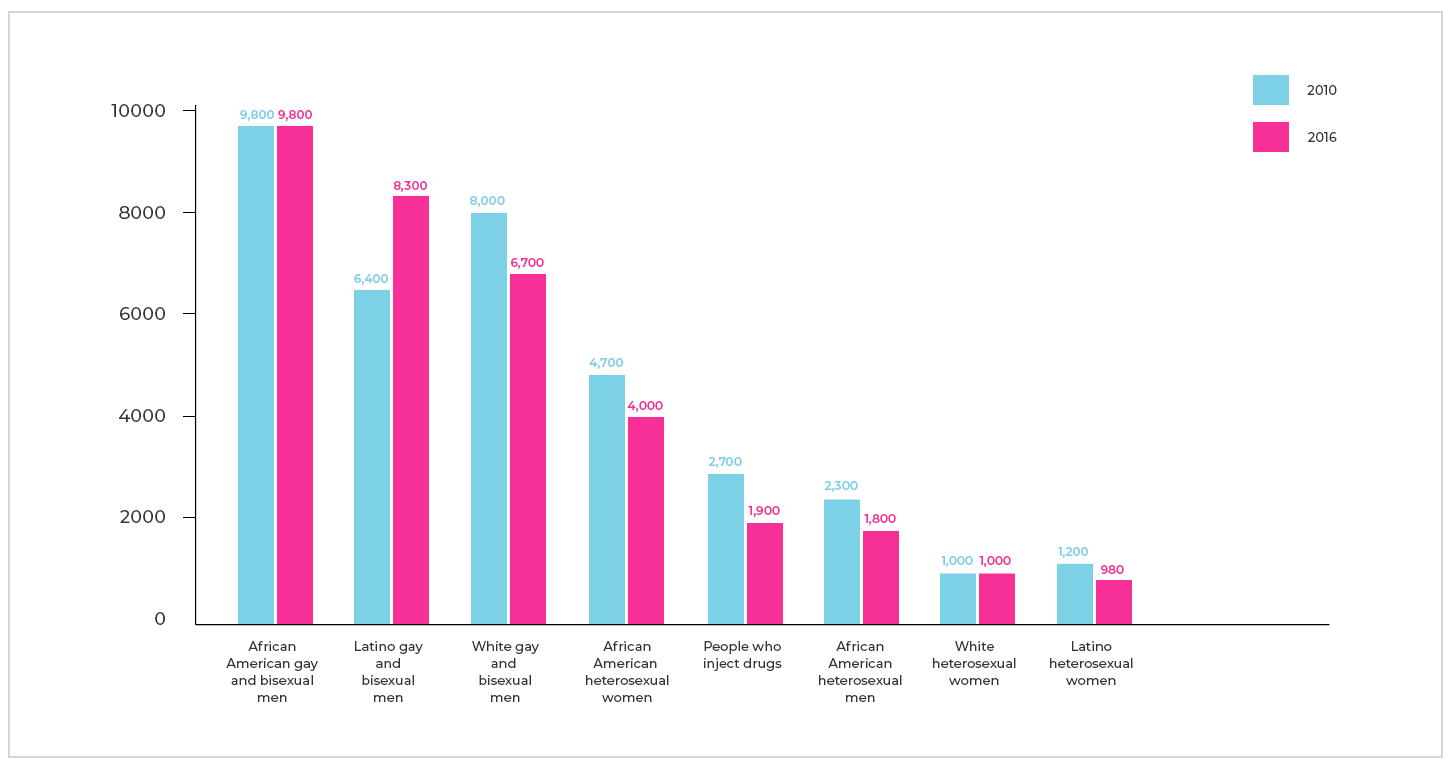 Since HIV compromises the body’s immune system, people who are HIV positive have a higher risk of contracting infections and diseases, including:

Furthermore, people with HIV may experience a faster progression of these diseases if left untreated – since their immune system is unable to fight off the infection.

The Progression of HIV to AIDS

Once HIV has progressed to stage 3, the person’s ability to fight off infections and diseases is severely compromised, putting them at a very high risk. This most often develops 10 years after a person has experienced HIV transmission.

Some of the signs and symptoms of Stage 3 HIV include:

Untreated HIV can also lead to further complications, such as neurological issues including dementia, depression, and anxiety, as well as kidney disease.

The great news is that a lot of progress has been made in terms of HIV prevention and management.

A person living with HIV can prevent the disease from progressing into AIDs by taking HIV treatment drugs – known as antiretroviral therapy. People who are HIV-positive should receive regular vaccinations to protect themselves from diseases. They should also practice safe sex and take care of their bodies by staying active, reducing stress, and eating healthy to preserve their immune system. 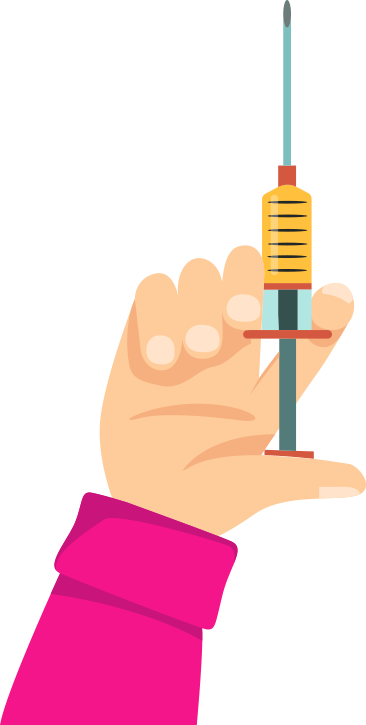 You may be wondering how much does

After all, this medication must be taken for the entirety of a person’s life, and the cost of HIV treatment can certainly add up.

HIV treatment drugs are, unfortunately, quite expensive without insurance, costing an average of over $23,000 per person. Some medications are covered under insurance plans, Medicare, and Medicaid, which can help to lower the costs.

There are several programs and services that provide financial assistance so people living with HIV can receive the proper medication, such as the Ryan White HIV/AIDS Program, AIDS Drug Assistance Program, and non-federal Patient Assistance Programs.

The National Institute of Allergy and Infectious Diseases (NIAID) is working to develop new HIV treatments and alternatives to prescription medication, such as injections or implants. They have been developing long-acting HIV drugs that can neutralize antibodies to attack and even kill HIV-affected cells.

NIAID is also in the process of developing therapeutic HIV vaccines to support sustained viral remission, which can be given to people who are living with HIV. This vaccine would boost the immune system to keep the virus in check and prevent it from progressing.

Learning about HIV transmission can be scary – but knowledge is power.

Understanding what puts you at risk and how to prevent yourself from contracting this virus means that you don’t have to be so afraid.

If you have any questions or concerns regarding HIV transmission and how to protect yourself, don’t hesitate to reach out to us! We are happy to provide as much information as you need.