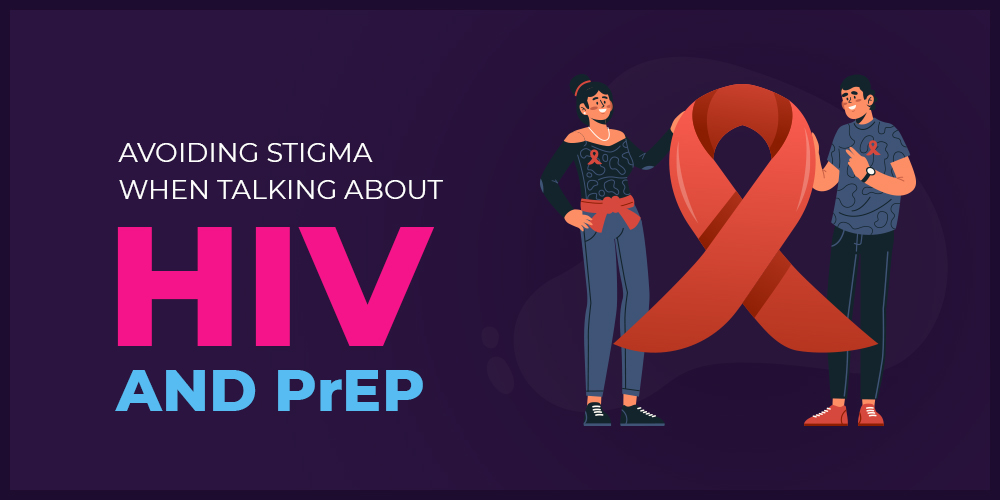 It’s not always easy to talk about HIV or treatment options like PrEP. Sadly, since so many people are uneducated when it comes to HIV, the language they use to talk about it only furthers HIV stigma and discrimination. This can have damaging effects on people living with HIV or who are at risk of transmission.

So, what is HIV stigma exactly? It comes down to using improper, offensive, or misleading language about the subject which supports prejudicial beliefs about a group of people being socially unacceptable.

So, what is the best way to manage and remove the stigma around HIV and PrEP? Let’s discuss.

Why Is it Important to Use Specific Language Around HIV?

Sadly, the topic of HIV has been stigmatized since it was first identified in the 1980s. People used to use horrible language towards people who were HIV positive and spread false information about how it could be transmitted.

This has resulted in a long-lasting stigma around the subject which often deters people from openly talking about their HIV status or even getting tested in the first place. As a result, over 60% of Americans have never gotten an HIV test.

This is incredibly alarming news, considering that approximately 13% of people who are HIV positive do not know their status since they have never been tested. This increases the likelihood of transmission and can lead to serious health issues if HIV is untreated.

HIV stigma and discrimination have also hurt the community of people living with HIV tremendously. Due to their HIV status, people have lost jobs, been ostracized by their families and loved ones, and even received poor healthcare as a result.

Using incorrect and stigmatized language only leads to misinformation, confusion, and negativity, especially for people living with HIV. Being a supporter of this community requires understanding how to avoid stigmatic language to help change the perception around HIV and PrEP.

One of the key things to remember when talking about this subject is to use “person-first” language. This means that you consider how your words would make a person living with HIV feel or be perceived.

For example, instead of saying “a person with HIV” or a “person suffering from HIV” use the phrase “person living with HIV.” You should also avoid referring to HIV as a disease or saying someone is “infected with HIV”, as this is extremely negative and perpetuates that HIV is a deadly health condition. With proper treatment, people can go on to live very healthy lives. Instead, stick to phrases like “HIV positive”

Understanding the Difference Between AIDS and HIV

Another major misconception that people have is using AIDS and HIV interchangeably. While HIV and AIDS are related, there are significant differences and you should not confuse one for the other. So, what is the difference between HIV and AIDS exactly?

One of the most notable differentiation is that one is a virus while the other is a health condition. HIV stands for human immune-deficiency virus, which means that the viral cells enter the bloodstream and reproduce by overtaking healthy cells. This causes the immune system to go into overdrive. Without medication, HIV will eventually suppress the immune system completely, leaving the person vulnerable to other types of infections.

HIV is classified in stages as the viral load or the number of viral cells in the body increases. Once it has reached the end stages where the immune system is damaged, it may be classified as AIDS which stands for auto-immunodeficiency syndrome. This is a health condition that leaves a person with no natural defense from diseases, including severe infections, viruses, or even cancer.

Thanks to modern medicine, people who are diagnosed with HIV can manage their viral load so they never progress into stage 2 or 3. Medication like PEP can be given within 72 hours of exposure and prevent the viral cells from reproducing in the body, preventing transmission. People can also take HIV medication to suppress the virus to undetectable levels

Another common mistake is saying that people “catch” HIV/AIDS or pass it on. Saying you can “catch HIV” or that someone “gave a person HIV” is incredibly misleading and places the blame heavily on the person living with HIV. Instead, we use the term “transmission” because this is a more accurate medical term that explains how HIV is passed.

You cannot “catch” HIV through casual interactions with others, such as hugging, holding hands, or even kissing. There is also a very low risk of transmission through oral sex; however, using protection is always recommended during any sexual encounter.

Using the right language about HIV transmission helps to stop misinformation and helps people who are at risk protect themselves more effectively. Also, avoid saying “HIV carrier” or saying people are suffering from the disease. People living with HIV can have normal, healthy lives if they take the proper medication to suppress their viral load.

How to Help People Living with HIV Through Positive Language

This is not directly caused by HIV, but instead by issues related to discrimination. HIV stigmatization can trigger these mental health issues or make them even worse, as it ostracizes people due to the negative perception from society.

There are related factors that contribute to mental health issues for people living with HIV, such as:

One way that you can help to support others is to avoid using negative language and encourage others to do the same. When talking to a person living with HIV, you should also

Help them to avoid negative self-talk, such as saying “I have a disease” or “it’s my fault.”

Another way to remove the stigma about HIV and AIDS is through education and support. Get involved with local organizations and get tested regularly for HIV – and encourage your friends, family, and partners to do the same.

Cover some ways that you can support others, such as becoming more educated, going with them for tests, connecting with organizations like PrEP Daily for resources.

Want to Learn How to Reduce Stigma and Discrimination around HIV?

Helping people who are living with HIV as well as those at risk of transmission starts with support and understanding. Here at PrEP Daily, our goal is to help others learn more about HIV transmission and prevention methods, such as taking PrEP.

Our team of navigators connects with people to provide resources and help people find local doctors to discuss treatment and prevention options. To get involved or to learn more about our services, please connect with PrEP Daily today!