If you’ve done any research on HIV prevention and treatments, you have probably seen the terms PrEP and PEP. While these two terms look quite similar; they are very different – and it is important that you understand what each of them mean.

Now first, let’s go over the similarities of PrEP and PEP. Both are treatment plans intended for people who at high risk of HIV transmission but are currently negative for HIV. This could be:

Now, just because a person comes into contact with HIV does not automatically mean they will contract it. Since HIV is a virus, it is measured by the viral load in a person’s bloodstream. Upon first contact, the viral load will be low and highly manageable. But if the virus is left untreated, the viral load will increase quite quickly, as you can see from the graph below. 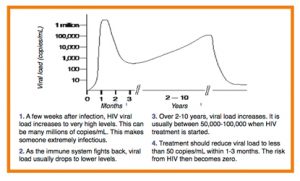 So, it is incredibly important for a person to use proper protection measures and treatment plans to either prevent HIV transmission in the first place or treat it as soon as possible.

This is where PrEP and PEP fit in.

So, now let’s explain the key differences between these HIV treatment and prevention plans.

1. The Level of Exposure 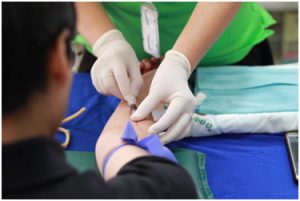 You may be wondering how HIV is caused in the first place, too. HIV transmission occurs through bodily fluid contact, which can occur during sexual intercourse or through shared needles. HIV can be contracted through contact with blood, breastmilk, or rectal, vaginal, or seminal fluids.

PEP is also given to people who think they may have been exposed to HIV through sexual contact, shared needles or someone who has been sexually assaulted. Also, if a healthcare worker is accidentally pricked by a used needle during work, they would likely be given PEP as a precautionary measure. 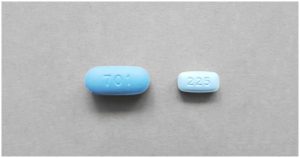 You may be surprised to learn that the same medication can be used for both PrEP and PEP. However, the way that the drug is administered and the regimen will differ if it is being used for PrEP or PEP.

One of the main drugs used for both treatments is Truvada, which was approved by the FDA (Food and Drug Administration) in 2012. Truvada is a combination of two separate medications that work together to prevent HIV from reproducing and growing within the body. This is done by blocking an enzyme that HIV creates to reproduce. Therefore, when this drug is being used when a person’s viral load is low, it cannot increase.

The most common side effects for this drug include:

Truvada can also cause kidney or liver damage, primarily in people with pre-existing conditions. Doctors will routinely check these organs while a person is taking Truvada for PrEP. Some people have also experienced bone density loss, but this is reversible once they are taken off of the medication.

Descovy is another medication recently approved by the FDA for PrEP. However, it is currently only approved for cisgender males and transgender females. Some common side effects from this medication include:

Descovy does not seem to have any negative effect on kidney or liver health, though it may cause slight increases in LDL cholesterol and triglycerides.

Now, Truvada is also recommended for PEP therapy, but it is instead taken three to five times a day for 28 days. After this, the patient will be tested for HIV, and the doctor will determine the treatment plan for the remainder of the regimen. Some people will need to continue to take the medication (particularly if they are at a high risk of HIV contraction), while others may be able to stop.

In the past, Truvada was prescribed alone for PEP, but WHO (the World Health Organization) now recommends that it be taken with Isentress or Tivicay, which are additional medications to ensure that it is more effective. 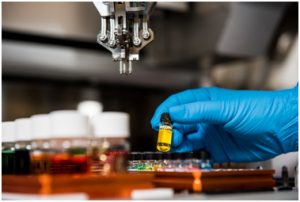 As with most diseases, it is easier to prevent it than to treat it.

Take the flu for example. If you come into contact with someone who has the flu, you are less likely to get it if you have already had a flu vaccine. If you wait until after your exposure to get a vaccine or take medication, you are more likely to catch it.

The same goes with HIV. The most effective way to prevent HIV is to take PrEP before exposure.Both Truvada and Descovy are equally effective for preventing HIV when taken properly. When taken correctly they can reduce risk of HIV by up to 99 percent.

For instance, Truvada is proven to be most effective when taken once a day for PrEP. But if the pill is taken less often, it is not as effective at preventing HIV transmission.

It is harder to measure PEP’s effectiveness since there have been no randomized studies conducted. However, other tests have shown that the sooner PEP treatment is started, the better. The best timeframe is within the first 72 hours of exposure.

According to the most recent studies, people who contracted HIV after PEP treatment did not adhere to the treatment plan entirely or they were still engaging in behavior that put them at risk (such as unprotected sex or sharing needles). There was only one case out of 2,209 who did contract HIV after completing a 28-day PEP treatment course.

Ultimately, the best way to prevent HIV is to protect yourself and reduce your risk of transmission and exposure. This can be done by:

And finally, you should always consult your doctor about any health concerns you have. They are the only ones who can determine whether or not PrEP or PEP is the best treatment option for you.

If you have any other questions about PrEP or HIV prevention, please reach out to us at PrEP Daily.